We are outraged. We are organised. They forgot that 5 million women lit the world on fire two years ago.

On January 19 and 20th, 2019, we’re going to remind them when we flood the streets of Washington, D.C., and with sister marches in cities across the globe including Auckland and Dunedin. The #WomensWave is coming, and we’re sweeping the world forward with us. 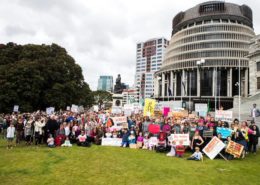 Women are under-represented in leadership, adversely affecting our collective health, safety, and economic security. We seek fair and just representation of women locally, nationally and internationally.